[AD] It’s been a long time since I’ve written some recipes and when I received the opportunity to test out some vegan cheese, I knew this would be the perfect time to do it! As you most probably already know, I am vegetarian but I do try to incorporate vegan meals once in a while. I don’t really try to add cheese into my meals but I really wanted to take advantage of this opportunity to try different things and get out of my comfort zone. I’ve never tried vegan cheese before and if you are either interested to find out my thoughts on vegan cheese or read some vegan recipes that I have tried then keep on reading! 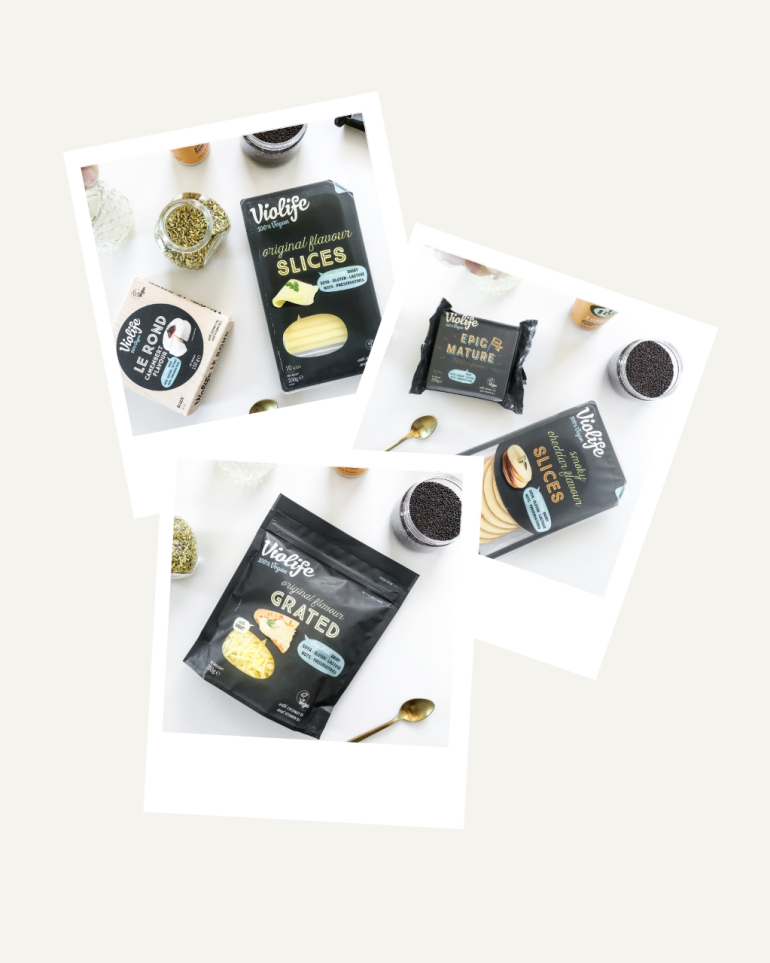 I got sent 5 of their products to try out which are Le Rond Camembert, Original Flavour Slices, Epic Mature Cheddar Flavour Block, Smoky Cheddar Flavour Slices and Original Flavour Grated. Since I received a combination of cheese types from slices to block, I had the chance to mix & try them whether in my burger or even by melting them for a dish.

When I first tried them or shall I say added them into my dishes, I had a bit of a digestive problem which was something that I had already expected and was warned about so I knew it was normal but still I didn’t expect to get such a reaction because I had tried vegan products before. With that said, after I incorporated them more and more into my meals, I didn’t go through the same problem anymore.

It’s worth noting that this happened only on the first & second day and I was completely fine afterwards. Now, when it comes to the taste – I found the taste to be varying depending on each product. Depending on the dish you try out, they all melt very well and there is a mild flavour in general. I found the smell of the cheddar flavoured block cheese to be quite overpowering but that could be because I have a sensitive nose. Overall, I would say to try them out if you are after good vegan cheese that aren’t tasteless.

Now, let’s get into the dishes! You can use any of the cheeses mentioned above in these recipes but I’ve mentioned which cheese I used in case you want to try the same recipe. Without further ado, let’s jump into it! 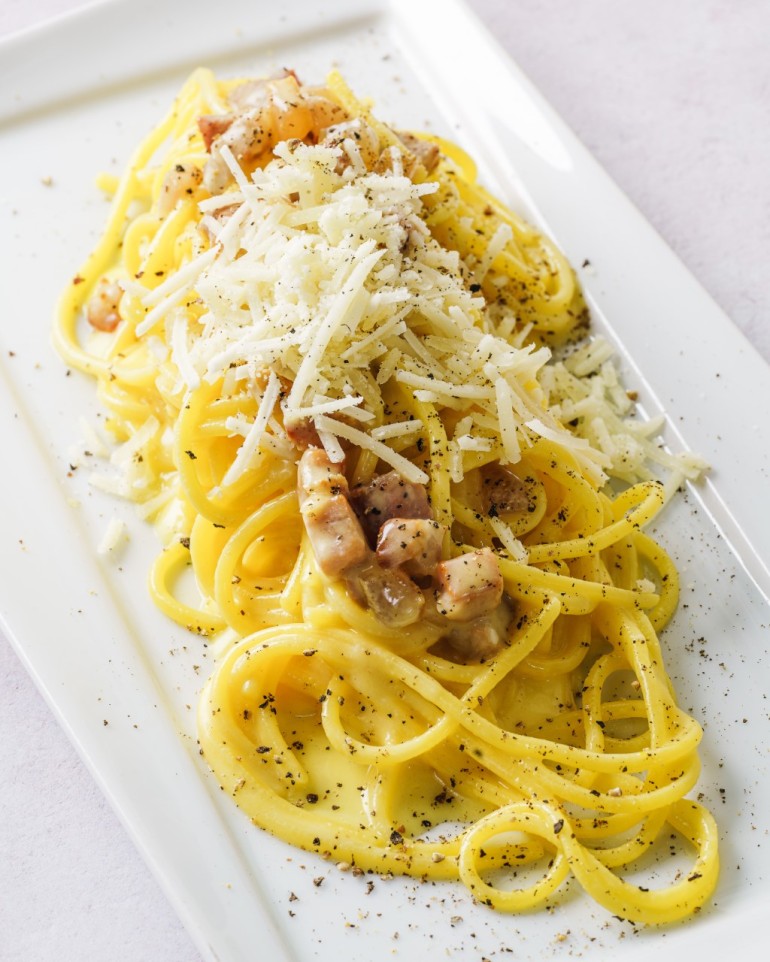 Starting off with cheese bolognese, you can either add or remove some of these ingredients depending on your preference. In my case, I didn’t add minced meat but if you aren’t vegan or vegetarian, I would highly recommend to add them and the same goes for the vegetables you want to use. You can add the vegetables you like, it’s completely up to you!

Chop the carrot, onion and tomato into tiny pieces then heat your pan at a medium heat and drizzle a bit of oil. Add the chopped onions into the pan first. After the onions have browned, add the chopped carrot and a couple of minutes later the chopped tomato.

After stirring and letting it sit for a couple of minutes, add two pinches of salt and crushed peppers then let it marinate. After 5-6 mins, add one big pinch of dried or fresh parsley depending on your preference.

You can now add your preferred pasta and water into the mix inside the same pan. In this case, I’ve added penne. Then increase the heat and let it boil for 15-20 mins and switch it to medium heat afterwards. Don’t forget to stir the mix to spread the aroma.

Add tomato sauce and mix it well in high heat once again. It’s now the perfect time to taste your mix and see if you need to add more salt.

You can now add two pinches of grated cheese and stir. Then, put heaps of cheese on top.

Cover the pan with a lid in low heat for 5-6 mins and then put the pan into the oven for 20 mins and voila, it’s done! 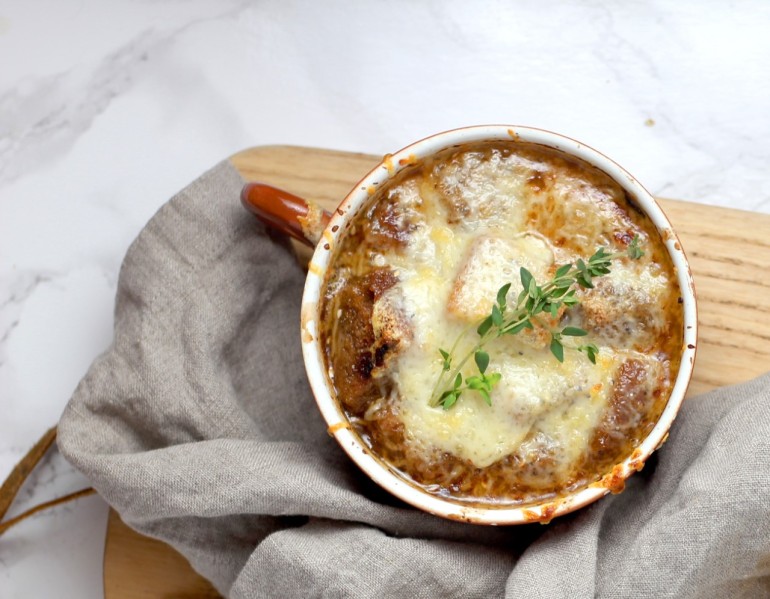 If it’s something I haven’t already mentioned before then I will now and it’s the fact, I love soups! I think you can have them at any time of the year whether it’s summer or winter and they are very good for your body, they are filled with nutrients and they are also very light on the stomach.

Slice the red onions and add them into a pot in medium heat with 3 tbsp of oil. Add two pinches of salt and let them fry for around 10 mins.

Lower the heat and slowly sizzle it & let it colour for around 15 mins. When the onions start to caramelise, add half a cup of apple juice and stir well. Afterwards, let the mix marinate and wait until the liquid evaporates completely.

Meanwhile, slice one garlic into tiny pieces and add them into the pot with the same mix mentioned above.

After the liquid is completely evaporated, add 3 tbsp of vinegar, 1 tbsp of sugar and mix well. After a couple of minutes, add some fresh or dry thyme depending on your preference and 1 tbsp of plain flour to thicken the soup.

At this point, the mix should be in a very thick consistency. After the onions are cooked well, add 800ml of water & 1 vegetable stock pot (I use the jelly ones) and let it cook for 30 mins. This is also the perfect time to taste and to season if needed.

You can now cover the soup with shredded or sliced cheese and cover the pot with a lid to melt the cheese completely. And it’s done! I felt it wasn’t fair if I didn’t include this recipe when cheese was included (and being French). It’s a very easy, quick & simple dish to make and it tastes amazing!

Firstly, prepare about 300ml of milk, 30g of flour and 30g of butter. Add the butter into a pot in low heat and after the butter is completely melted, add 30g of flour inside the pot and start whisking immediately. The texture should be similar to a consistency of melting cookie dough.

Then pour the milk little by little into the mix while whisking it and make sure that there aren’t any lumps. To finish it off, sprinkle some crushed peppers and add two pinches of salt. When it starts to boil and bubble, turn off the heat and cover the pot with a lid. You have now finished the first part of this recipe!

Take 6 slices of toast and spread butter on one side and the mixture you have concocted in the above steps on the other side. You can place shredded or a slice of cheese in between two slices of toasts.

Now put a pan in medium heat on the stove and melt a piece of butter. After the butter has melted, place the sandwiches. Flip them when they are golden and spread more of the sauce you concocted on top.

Top it off with more shredded cheese, cover the pan and let the cheese melt. When the top is golden, you can turn off the heat and you now have your croque monsieur ready!

Thank you so much for reading! – xo N